The year is 1837 and Le Touquet is about to enter history. Alphonse Daloz (1800-1885), a Parisian lawyer, decides to purchase the Domaine du Touquet, an untouched hamlet of the village of Cucq. The beginning of a fabulous adventure…

At the time, a bird’s-eye view of Le Touquet ressembled a 1,600-hectare triangle with its northern tip at the mouth of the estuary. And it’s no coincidence that, in local dialect, the word “touque” means tip, or corner.

A piece of the resort’s history

In 1855, Monsieur Daloz began planting maritime pines to stabilise the dunes, thus creating a vast forest, where he regularly invited his Parisian friends to join him for the hunt. Among them was Hippolyte de Villemessant, founder of the newspaper Le Figaro. It was he who, in 1874, made the suggestion to Daloz to create the seaside resort of Le Touquet, between the forest and the sea.

The “Paris-Plage” housing project was officially inaugurated in 1882, marking the birth of the resort. The choice of name was far from innocent, as it reflected the intention to make this the holiday destination of Parisians. A year later, Paris-Plage had a population of 30 and a housing development comprising two seafront chalets (La Vigie and L’Avant-Garde), a château (owned by Monsieur Daloz), a semaphore and two lighthouses.

The most Parisian of all Pas-de-Calais beaches

After the death of Alphonse Daloz, Le Touquet and Paris-Plage were acquired in 1902 by an Englishman, Sir John Whitley who, after years of difficult negotiations with Cucq council, obtained in 1912 the official creation of Le Touquet-Paris-Plage.  At the time, the resort could be reached from the capital in just 3 hours, thanks to the Northern railway line and the Etaples-Paris-Plage electric tramway inaugurated in 1900.

The current Conference Centre was built in 1913 in place of the timber château that Alphonse Daloz had had built in 1864. Before the crisis of 1929, the Casino that occupied this building was considered to be one of Europe’s most important gambling venues. It was frequented by theatre and cinema celebrities, Parisian high society and, above all, the English aristocracy. Among others at the baccarat table was the Prince of Wales, the future King Edward VIII.

So Le Touquet’s history tells of the most sophisticated, high-society beach in the entire Pas-de-Calais department. Even today, with its picturesque beach huts and bourgeois villas, the resort retains its unmatched aura from that first Golden Age of the Belle Epoque. A joint success, following the torment of two world wars. 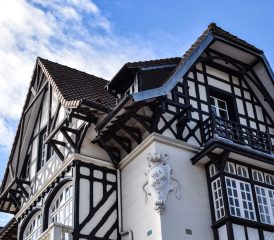